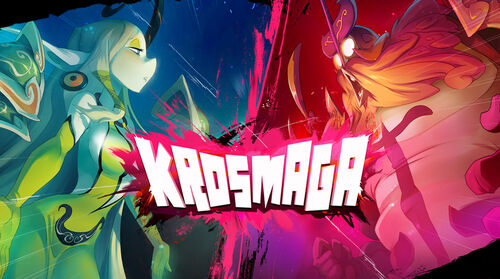 Krosmaga is a digital and physical card game mixing elements of deck-building and tower defense that was announced by Ankama on October 6, 2015. Planned for release in 2016 for PC, iOS and Android (as well as in board game format), the game will let players choose one of the twelve gods of the World of Twelve, each with its own pre-built deck, and do battle on a 1-vs-1 field (although solo features will also be implemented).

The deck of cards, which can also be completely customized, will feature characters and creatures from the Krosmoz as well as divine spells. A Kickstarter campaign is also expected to help fund the project, though its launch date has not yet been announced.

In a different post (in French), he added details about the way the game is played, as well as the reasons for the crowdfunding campaign:

Two gameplay videos that use the French version of the game were released on November 18, 2015:

In the forum posts above, Tot also mentioned that the original idea for the game came up about a year and a half prior and has been in development since. While the company originally wanted to turn Wakfu TCG into a video game, as had been expressed around the time the game came to an end, they found that the play style could not easily translate to a digital experience. That is why Krosmaga took its place and added elements of other game types to the mix.

Regarding the crowdfunding campaign, Tot sees three purposes for it: to gauge interest in the game and in particular the digital version versus the board game; to advertise the game; and to gather funds to add more features to the game (mentioning that the game will be made regardless of the campaign's success).

Games set in the Krosmoz (edit)

Retrieved from "https://krosmoz.fandom.com/wiki/Krosmaga?oldid=6896"
Community content is available under CC-BY-SA unless otherwise noted.