This article is a stub. You can help Krosmoz Wiki by expanding it.

Joris Jurgen is a character of mysterious origins who was born on Descendre 32, 390. Adopted and raised by Kerub Crepin, a retired Ecaflip adventurer, he spent his childhood in the city of Astrub before they moved to Bonta. Most of his adult life is unknown, but in the Wakfu Era, he still lives in Bonta and tends to Kerub's old shop, while also serving as the king's emissary. On several occasions, he assists the Brotherhood of the Tofu on important missions such as defending the Sadida kingdom against Nox (Wakfu animated series) or finding the Eliatrope Dofus (WAKFU Manga).

In a blog post on the Dofus movie website[1], Tot describes him as one of the key characters that tie the various eras and products of the Krosmoz together and serve as a focus point, similar to Goultard and the Brotherhood of the Tofu. As such, he makes appearances in a great number of products and often plays a significant role in their story. 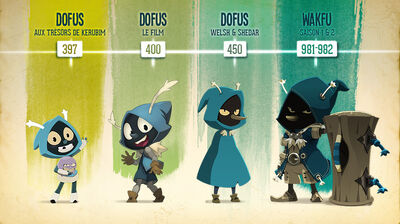 According to the official timeline, Joris was born on Descendre 32, 390 and taken in by Kerub Crepin the same year. Nothing is known of the circumstances of his birth and adoption, but a slice of his childhood can be seen in the animated series Dofus: Kerub's Bazaar, where he is 7 years old. During this period of his life, he lives with Kerub and his pet flea Fleeflee in a Shushu house called Luis in the city of Astrub. Both him and Kerub seem content with their father-and-son relationship, the child delighted by the stories and wonders provided by the old man. Joris sees Kerub as an idol and dreams of living the same kind of adventures he keeps hearing about.

Despite his unique origins, Joris behaves like most children. He shirks chores and homework but loves doing mischief and going on small "adventures" with his adoptive father or his pet Pupuce. He is at times naive as only a child can be, and sometimes sees right through someone's lies or secrets. And while generally obedient, he can also become particularly annoying and stubborn in order to obtain something.

For the duration of Kerub's Bazaar, the Osamodas Simone works as a maid for Kerub after Joris accidentally answered her request for work in the mail. Simone, who acts aloof with most people, is always friendly with Joris and protective of him, acting as a bit of a mother figure for him. Except for her, he seems to have few friends outside the household, although we see him interact on occasion with Tatak (Bash Squale's son).

In Dofus Book I: Julith, Joris is about 10 years old and lives in the great city of Bonta, still with Kerub, Pupuce and Luis. He has become friends with Lilotte, the adopted daughter of Kerub's lifelong rival Indie Delagrandaventure, and they spend a lot of time playing together and challenging each other like Kerub and Indie used to.

Joris is revealed to be the son of Jahash Jurgen, Huppermage Supreme of Bonta, and Julith, the Butcher of Brakmar. He is the host of Grougalorasalaar, the dragon embryo of the Ebony Dofus that fled into his body when it shattered. The dragon seems to emerge when Joris is upset or the Ebony Dofus is nearby. Upon Julith's machine being destroyed at the end of the movie, Joris is temporarily relieved of his role as a host but takes it on again when he sees that Grougalorasalaar needs to be cared for.

As an adult, Joris is quite secretive and few people know him personally. Still living in Bonta and tending Kerub's shop, he also acts as emissary for king of Bonta. In 981, he participates in the defense of the Sadida kingdom during Nox's attack, alongside the Brotherhood of the Tofu. Two years later, he joins them on a quest for the Eliatrope Dofus in the WAKFU Manga, intrigued and worried by Jiva's behavior. A few years later, he helps them take the Dofus back from the Brotherhood of the Forgotten, hoping to save the Sadida kingdom from flooding.

Throughout these events, he never says much about himself or develops strong ties with anyone. Tot's comments[2] about the hardships Joris has faced in his long existence and a certain detachment arising from them may mean that he is slow to trust others, or even reluctant to bond with people who are not immortal and will likely die long before he does. Despite this, he remains committed to fighting for the greater good and often becomes involved in just causes that do not seem to concern him directly.

Joris displays considerable feats of speed and might, able to run up vertical walls (for example, in the Remington comics) and defeat formidable opponents such as Razortime. He also seems to have access to some magical powers, putting Sadida guards to sleep with a simple touch in the first season of Wakfu and casting a protection spell on the player character in Dofus: Les Larmes turquoise.

In Dofus Book I: Julith, it is revealed that he is the host of the black Dragon Grougalorasalar, which appears to be the cause of his appearance, longevity and power. Although one can presume that he was separated from the Dragon at some point in his life (as Ogrest collected all six Primordial Dofus by the year 789), he still appears healthy and powerful in the Wakfu Era.

Retrieved from "https://krosmoz.fandom.com/wiki/Joris_Jurgen?oldid=9098"
Community content is available under CC-BY-SA unless otherwise noted.